Situated in a beautiful neighbourhood in the heart of old Vienna, it is known as the geological conscience of Austria. The library is crammed with more than 350,000 yellowing books, hand drawn maps, letters, journals and theses, some dating back to before 1849, the year the Geological Survey of Austria, Geologische Bundesanstalt (GBA), was founded.

GBA is the second oldest geological institution in the world, yet in many ways the most modern. The new database system gives geologists and scientists all over the world direct online access to gems of geological history.

“It may sound crazy that we still collect everything in paper form. But unlike floppy disks, tapes and CDs, paper is impervious to the passage of time. So when we scan the material and make it searchable in detail in the Adlib system via the internet, we have the perfect symbiosis of old and new,” says Thomas Hofman, dedicated librarian and in charge of the overall outward flow of information.

Responsibilities also encompass the geological history of the former Austria-Hungary. In fact, there is no complete set of geological research material in Serbia, Croatia, Slovenia and Hungary. A great part remains on the shelves in Vienna, where it was originally collected.

More than 120 project staff and state employees work at GBA, analysing, evaluating and researching in fields as diverse as petrology, mineralogy and palaeontology. Looking at the big picture, geology is everything – the very basis of our civilization. Fossils bear witness to evolution, mineral and ore resources, deposits of oil and gas, the sustainable supply of drinking water, environmental aspects as well as geological hazards – a key concern in a mountainous country like Austria.

The library and its system are the heart of the institution. The foundation is the library’s own collections. International partnerships with organisations like the European Geosciences Union (EGU) are a source of additional data from high-ranking journals, along with submissions of thousands of abstracts.

“Our philosophy is that you should be able to find the unexpected, whatever spawns ideas and opens new doors. We collect everything, even material others discard due to space constraints,” Hofman explains. The university is focused on new, trendy research, but progress is slow without the historical material. Comparisons with old drawings of microfossils, for example, can provide invaluable pieces of the puzzle, as do the carefully hand drawn maps of geological areas that look completely different today.

“Austria was once dotted with small-scale mines. Though overgrown, they can still be found using the old geological maps, which also reveal the occurrence of substances that we need today, but knew little about in the past. Vanadium, Germanium and Indium are crucial to state-of-the- art touch screens for mobile phones. Now that we’ve mapped all these mines, there is keen interest in utilising the resources,” Peter Seifert, Director of GBA, points out.

The Austrian government is dependent upon the work done at GBA, such as systematic geologic mapping of entire areas. 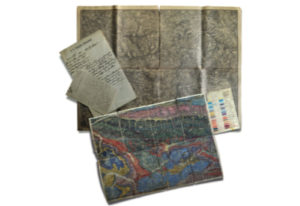 These maps are used as the basis for new construction, infrastructure and water protection. Oil companies and other private enterprises also order input data for various purposes. Here too, the historical treasures are priceless.

Geologists are geographically oriented and the Adlib system allows them to search geo areas. The clickable maps, author names and thousands of keywords in two languages have made the Adlib system a prime example in the geo world.

“When we scan the material and make it searchable in detail in the Adlib system via the internet, we have the perfect symbiosis of old and new.”

Information is scanned on request. And content just keeps growing. The next step will be to link all internal departments at GBA to the system, creating an umbrella for all databases in the building.

Thomas Hofman is ecstatic about the technological advances. Even with a limited staff, the library provides round-the-clock service to the entire world. Still, he makes no secret of his love for analogue – the paper material in all of its nostalgic forms.

“You have to smell the old books and maps, touch them and feel them,” he says, eyes glowing with the passion of a true collector.