Watch now!
Back to blog

For the Vienna Technical Museum (Technisches Museum Wien – TMW), relocating to a new depot was a particularly big challenge that involved the movement of thousands of objects, some weighing many tonnes. It took planning, planning and planning. And the right software.

TMW has several large depots as the museum possesses many more items than can be exhibited: only about ten percent of the museum’s 160,000 objects are on show. In mid 2017 the rental agreement for one of its depots was due to expire and TWM needed to find a new location for many large transport objects stored there, including cars, motorbikes and bicycles, but also other heavy items such as locomotives, a printing line and gliders. 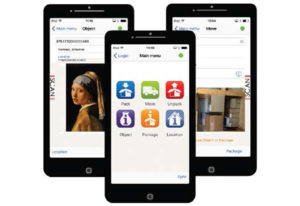 A depot in Haringsee (Lower Austria), covering 8,500 m², was chosen. The building was divided into several sections: an area with floor storage for objects such as trains with a weight up to 30 tonnes; a section with pallet racks; a third area for transport objects such as cars, special-purpose vehicles or bicycles.

A reliable database
While organising the depot was a relatively simple undertaking, the move itself was a major challenge. “We needed about one and a half to two years before the actual relocation took place, and we began preparing to move while we were still planning the relocation,” says Harald Wendelin, in charge of digital collection management at TMW. A decision was made to use a barcode solution for moving the objects as such solutions are more efficient and safer than other methods. The first step was a comprehensive inventory of the depot. Each object was recorded in TMW’s collection management system, Axiell Adlib. The objects (approximately 10,000) were distributed into about 2,000 packages (transport units such as pallets, skids or boxes). These packages all received a barcode. In this manual process, the transport units or their barcodes were entered into the database with Bluetooth scanners, while the package was checked for completeness.

Once all objects had been recorded, it was possible to plan the actual transportation. This was not only about the timing, but also about the exact locations of the objects and packages in the new destination, along with drawing up grid zones for floor storage. These new storage locations were also given barcodes. Planning the new locations was a complex task. It did not just involve where to store particularly heavy or large objects, but assigning pallets to the appropriate shelves. The size, weight and width of the objects were taken into consideration in the planning process. This was worth the effort, however, because TMW was now able to store its items particularly efficiently.

Constant control in real time
Another advantage of advance location planning was that when trucks left the old depot, the TMW team was prepared for its arrival at the new location. As soon as a truck arrived, its contents could be distributed directly to their predetermined location: the aisle and shelf were already assigned. Every two days approximately, checks were carried out in the database to make sure that the predetermined locations matched the scanned locations.

TMW chose Axiell Move, an application which had proven itself in other moves (such as for the Imperial War Museum in the United Kingdom), to handle the change of depot. The Axiell Move application can be used in conjunction with the Adlib CMS and a mobile device, such as an iPhone. As an object arrived in the new depot, a TWM employee scanned the barcode with a mobile device running the app, updating the change in location in real time. At the same time, the contents of a transport unit could also be checked on the spot when necessary, because all the information about the object was available on the mobile device via the app. This meant that the database information was up to date immediately following the relocation. 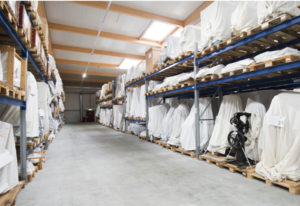 Project Manager Helmut Lackner and his team planned the move for about two years. Their effort and precision were rewarded: the move took place in a few months with the first objects relocated in mid December 2016 and the last around Easter 2017. The precise planning and use of Adlib, barcodes and Axiell Move not only made it possible to carry out the move quickly, but there were no errors in the transportation itself. A total success for the TMW: “For a move, efficiency, control and an overview are particularly important. It always has to happen quickly, because the transportation is carried out by third-party companies, which costs a lot of money,” says Harald Wendelin.

Summary: planning is everything when relocating thousands of museum objects. If the people responsible prepare carefully for all eventualities, there is nothing to prevent a successful move: this saves time, money and, above all, stress.